Northern Ireland’s Blackwater Conspiracy have announced rescheduled dates for their biggest UK and Ireland tour in September and October with new headline shows added in Leeds, Sheffield and Swansea. The now 18-date trek will once again begin in Liverpool on September 8th and ends in familiar territory at Whelan’s, Dublin on October 24th. Original tickets for headline shows remain fully valid.

Joining them across the mainland UK will be blues-infused modern / new wave of rock ‘n’ rollers These Wicked Rivers, while at home they’ll be joined by The Davy K Project in Belfast and Status Quo’s Richie Malone and his All-Star Band in Dublin.

Frontman Phil Conolane adds “We’re disappointed to announce, but it’s not unexpected, we will not be visiting our friends in England, Scotland, Wales and here at home in April, May & June when we had hoped. However we will see you all in September hopefully and a particular new Hello to those of you in Leeds and Swansea. We’ve just added new shows there“. Adding further “Sadly this means we won’t be a part of Heretic Fest in Sheffield this May but we’ll play a full headline show at The Corporation in September to make up for it“.

Tickets remain on sale from your local ticket retailers and from www.BlackwaterConspiracy.com. 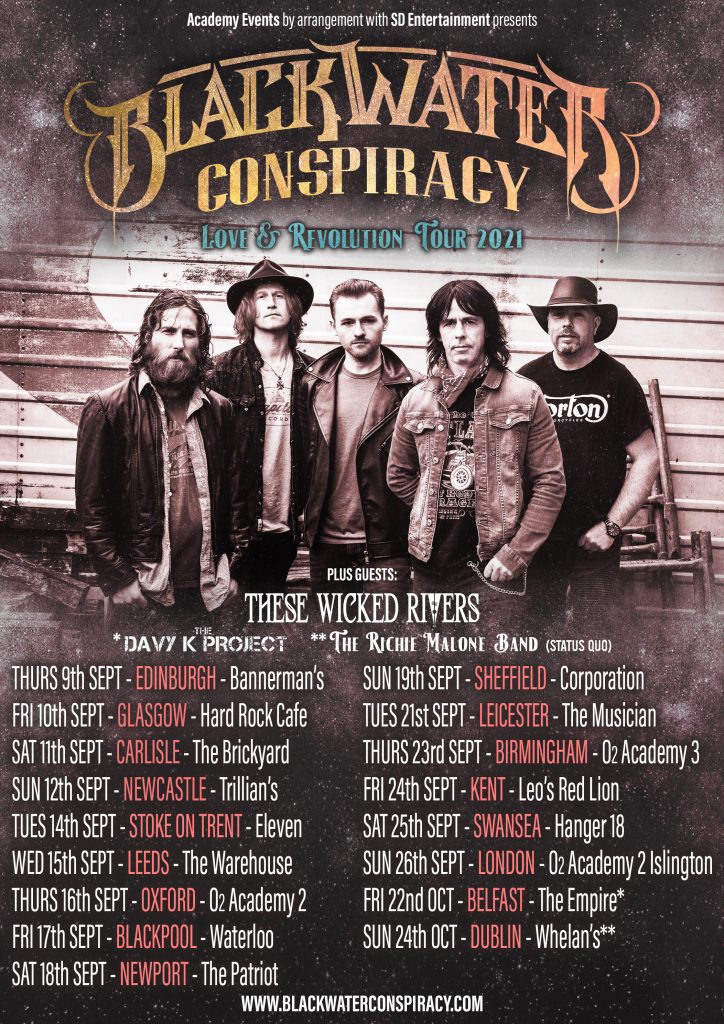 As part of the tour, Blackwater Conspiracy will be playing Hangar 18 Music Venue, Swansea on Saturday, 25th September 2021. Tickets for this show will be available from the venue website and Ticket247.